"A Rapid Return to Real Life"

Bunions can be painful and unsightly. One of the main reasons bunion-sufferers avoid surgery is concerns about how long they will be off their feet unable to take care of themselves or their responsibilities.

This is why CrossRoads Extremity Systems developed the miniBunion™ procedure; a cutting edge minimally-invasive technique to repair bunions. Unlike traditional procedures, the miniBunion™ technique requires a tiny incision 2 to 4-times smaller than a standard technique and requires much less trauma to the soft-tissues surrounding the toes. This minimally-invasive technique spares the blood supply to the bones and allows a smaller scar and faster rehabilitation.

Although it depends on surgeon recommendations and patient factors, many patients walk immediately in a special postoperative shoe.

The pain from recovery depends greatly on the pain tolerance of the patient. However, surgeons who utilize the miniBunion™ technique report their patients are in less pain than would be expected from traditional bunion surgery. 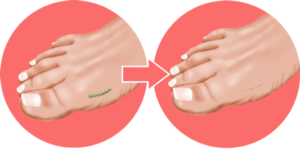 Bunion correction is a very commonly insured surgical procedure. Although miniBunion™ is a new minimally-invasive procedure, it is classified as a bunion correction procedure and is therefore covered by most insurance policies.

The miniBunion™ system is a minimally-invasive surgical technique for implanting a micro-titanium implant. This patent-pending implant has been designed to provide immediate stability to a bunion patient’s foot to allow a fast return to activity.

What happens in Surgery?

Although the miniBunion™ technique is minimally-invasive, it still involves the precautions and elements of a standard surgical procedure. Depending on surgeon recommendations, the surgery can be performed with the patient completely asleep or the patient can be awake with anesthetic applied to the nerves in their leg to prevent feeling any pain.

A small incision, generally 15mm to 20mm, is made on the side of the foot. The bone is realigned with surgical instruments and the miniBunion™ implant is attached to the bone to hold the bone in proper alignment. The incision is then closed with suture.

There are several other more-invasive, traditional options for bunion correction.

This procedure generally involves a 2 or 3 inch incision and quite a bit of soft-tissue dissection to allow the surgeon to visualize the bone to make bone resections. In this procedure, the lower end of the metatarsal (longest bone of the big toe) is separated from the shaft of the bone by making a chevron (v-shaped) resection with a surgical saw. The tip of the metatarsal is then shifted to a better position to reduce the bunion. A surgical plate or screws is then used to reattach the tip of the bone to the metatarsal and keep it in the new alignment.

This procedure generally requires a longer incision than the miniBunion™. In foot surgery, minimally-invasive procedures with smaller incisions have resulted in less infections. Additionally, recovery after traditional bunion surgery requires about six to eight weeks of rehabilitation.

The Lapidus is an excellent procedure for more severe bunions, but it is a more aggressive surgery that requires more bone resection and large incisions on the top of the foot. In this procedure, the entire metatarsal is rotated into a new position and secured with one or two metal surgical plates and screws.

Recovery from the Lapidus procedure frequently requires the patient to be non-weight bearing for four weeks after surgery in a postoperative boot; followed by four weeks of protected weight bearing in the boot.